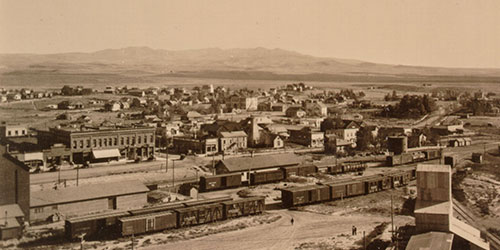 In the early 1900s, German Mennonite settlers from Kansas and Oklahoma moved into the American Falls and Aberdeen area seeking new homesteading opportunities. As the Mennonites established communities throughout the American west, they generally developed schools and hospitals to support their humanitarian mission. Even though they were based in Aberdeen, American Falls was selected as the ideal site for a new hospital due to its proximity to the railroad.

The effort to build a facility in American Falls began in earnest in 1910, with financial support coming from Mennonite churches in Kansas, Nebraska, Minnesota and Oklahoma. The Bethany Hospital and Deaconess Home was opened in temporary quarters in October of 1912. There were 11 rooms furnished by churches, societies or individuals. An article in the American Falls Press, dated October 13, 1912, stated “the operating rooms are equipped with the most modern surgical appliances and it will be needless for surgical cases to go elsewhere.” Many of the nurses came from the Bethany Deaconess Hospital in Newton, Kansas, as part of their mission work.

For the next ten years, the hospital struggled to keep its doors open, constantly threatened by looming financial deficits. Both Power and Bingham Counties, and the American Falls Chamber of Commerce, helped support the Home through monthly contributions which prevented its demise.

In 1925, construction of the American Falls Dam was begun and it was dedicated on September 26, 1927. During that time, the entire “Old Town” was abandoned, with many buildings being moved up the hill to the “Reclamation Site”. It had been determined that it was not economically feasible to move the hospital. The United States Reclamation Service paid the Mennonite Church $19,000 for the old hospital.

Ground was broken for a new Bethany Deaconess Hospital on September 16, 1926 a few lots north of the courthouse on the Pocatello Highway. (The building today is used by the American Falls Youth Center). The new facility, which cost $30,000, featured 42 rooms and would accommodate 21 patients. “Large corridors, a fine heating plant, ample closet room, a large dining room, a garage, and numerous store rooms lend every facility for conducting the hospital in an economical and efficient manner”, reported the American Fall Press. The project was sponsored by the Chamber of Commerce and was under the direction of Dr. Clarence F. Schiltz, for whom the new facility was named. Dr. Schiltz served the community from 1916 to 1932. Management of the Hospital was vested in a Board of Trustees.

The Bethany Deaconess sisters continued to operate Schilz Memorial Hospital through the mid 1930s, until they were recalled by their church to Kansas. At that time, operation of the facility was turned over to the Power County Commissioners. The hospital has been a county owned facility ever since.

In March of 1958, the Idaho State Board of Health gave the County Commissioners until Dec 31, 1959, to either renovate the existing hospital or build a new facility. State officials said that Schiltz Memorial failed to meet medical and safety requirements and if they weren’t corrected the license for the hospital would be withdrawn in 18 months. It was determined that the cost of renovation would be prohibitive, so plans were made to build a new facility at its present location on Roosevelt Ave. County taxpayers overwhelmingly approved a bond issue for $200,000, representing half the cost of the project. The balance would be financed through a Federal program known as Hill-Burton. Construction began on March 3, 1960 and the dedication of the new Power County Hospital and Nursing Home was held April of 1961.

The original configuration of the Power County Hospital allowed for 18 nursing home beds and 16 hospital beds, with room to expand to 60 beds. The Power County Press reported on April 6, 1961: “The advanced design of the building has many unique and unusual features, but perhaps the most different is the heating system. All heating will come from electrical wiring woven into the ceilings of the rooms and small radiation boxes in the hallways. It is probably the only hospital in the West heated entirely by electricity”.

In the early 1980s, the name of the hospital was changed to Harms Memorial Hospital, in honor of Dr. Frank Harms who served the area for forty years, from 1940 through 1980. The Aberdeen Times reported that during his tenure, he delivered nearly 3000 babies.

All through the 1980s and into the 1990s, the hospital struggled financially. The Power County Hospital District was created by the County Commissioners in 1986 in order to provide for financial support through the ability to tax county property owners. In 1999, the hospital earned a designation of Critical Access Hospital under a new Federal program to support rural healthcare. The support of County taxpayers, resolved the financial issues to the point where the Board of Trustees was able to proceed with plans which had been under consideration for some time, to plan for the future of building a new facility.

The Harms Family Clinic became a department of the hospital in 1998 when it was purchased from Dr. Lee. In 2002, the hospital purchased a mobile classroom building from the School District. The building was moved to the corner of Roosevelt and Gifford and became the new home of the Harms Physical Therapy Department. In 2003, the hospital purchased a 25 acre parcel west of town on the Frontage Road near the new American Falls High School. Long-term plans were developed to build a new medical campus at the site in the future. In 2006, the District successfully negotiated a lease on a brand-new clinic building, which is now located at 502 Tyhee Avenue, next to Rockland Pharmacy. The District also added Speech and Occupational Therapy services to the District.

The District has undergone many renovations from 2006-2010 with the remodel of an ER entrance and admissions office, the addition of a CT scanner and services, new facility van, and updating of patient rooms and facilities.

In the spring of 2010, the Board of Trustees voted to change the name of the District back to the original Power County Hospital District to coincide with the facility’s 50th Anniversary in spring 2011. The District entities were also updated to: Power County Family Clinic, Power County Physical Therapy, and Power County Skilled Nursing Facility.

In May 2017, the taxpayors of Power County approved a $14.95 million dollar renovation bond to update the aging Hospital and Skilled Nursing Facility. The facility renovations began in February of 2017 to update the entire facility, including an approximate 15,000 square foot east addition, that will be completed over a two year timeframe. The Power County Hospital, and its predecessors, have been providing quality healthcare services to the residents of Power County and Aberdeen since 1912. We are excited about the future growth of our facility and its service to our community.

Dr. Frank Harms, son of a doctor, was born in Cordell, Oklahoma in 1914. He began his medical training at Bethel College in North Newton, Kansas, and earned his medical degree at the University of Oklahoma, serving his internship at Good Samaritan Hospital in Portland. He began his medical career as a family practitioner in 1940, when he moved to Aberdeen and served with Dr. MacKennon. He and his wife, Lois Kliewer, moved to American Falls in 1953.

Dr. Harms was forced to retire in 1980 after suffering a mild heart attack. Soon after his retirement, the Power County Hospital was renamed Harms Memorial in his honor. Dr. Harms died March 28, 1981, of a heart attack while visiting friends in Colorado Springs.